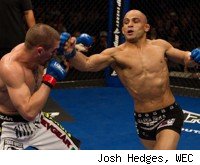 This is the WEC 46 live blog for Dave Jansen vs. Kamal Shalorus, a swing bout on tonight's Versus card.

Round 1: Shalorus looking for power strikes early with a big right hand and a left hook, neither of which connected. Shalorus then lands a left, and a right cross. Jansen shoots in for a takedown but is stuffed. It's quickly clear Shalorus is throwing bombs hoping for the big strike rather than working combinations. Jansen tries another takedown but is again stopped. Shalorus scores an easy takedown with 1:45 left and lands a few strikes before Jansen gets back to his feet taking minimal damage. Shalorus lands a hard right seconds later than opens a cut over Jansen's left eye. Shalorus caught Jansen twice in the last 30 seconds of the round, once dropping him to a knee. MMA Fighting scores the round for Shalorus, 10-9.

Round 2: Jansen is having trouble dodging Shalorus' power punches, and even though he's throwing more volume, it's to no avail. Since Shalorus is a better wrestler than him, he's going to have to change his approach. Shalorus hammers him with another right, and then another. Every time Jansen moves forward, Shalorus is ready to fire. About midway through, Shalorus takes him down. Jansen gets up quickly as Shalorus doesn't do much to keep him there. Jansen now has a cut in the middle of his forehead. Jansen fires off a hard right that momentarily hurts Shalorus, but can't capitalize as Shalorus fires back. Jansen tries to shoot again with 10 seconds to go, but Shalorus stops him again. MMA Fighting scores the round for Shalorus, 10-9.

Round 3: Shalorus keeps swinging big, but Jansen, who came in with a perfect career mark of 14-0, stays tenacious. He's going to need something big here. Shalorus lands a leg kick that buckles Jansen, who seems to be tiring although he's still game. Shalorus takes him down again, but lets him up seconds later. Jansen lands a nice uppercut, then a knee as the fight reaches 90 seconds remaining. Shalorus drags him down again and moves him against the fence. Jansen's face is badly bloodied but defending well. He gets back to his feet, and Shalorus holds on as the clock runs out. MMA Fighting scores the round for Shalorus, 10-9.