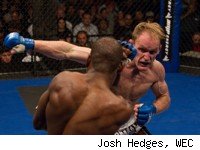 Deividas Taurosevicius improved his WEC record to 2-0, beating Mackens Semerzier in the opening bout of the televised WEC 46 card in Sacramento, Calif.

Taurosevicius, who controlled the first two rounds by manhandling Semerzier with takedowns, received scores of 29-28 across the board for the unanimous decision victory.

Taurosevicius controlled the first round with two successful takedowns, both leading to slams. From the ground Taurosevicius scored points with elbows to the head and body.

Semerzier had a variety of momentary submission attempts, including D'arce, a triangle choke, a kneebar and guillotine chokes, but the Lithuanian showed little difficulty evading Semerzier's attacks.

Semerzier won the third round with a better offensive set and strikes from the top. He turned around the fight with a kimura roll that put Taurosevicius on his back, where Semerzier displayed flashes of heavy ground and pound. He tried to steal the fight with the guillotine choke towards the end of the fight, but Taurosevicius escaped with 15 seconds remaining

Semerzier, who surprised many at his WEC debut last September by tapping out former IFL champion Wagnney Fabiano in the first round, suffered the first defeat of his career, dropping his record to 6-1 overall.

Taurosevicius, who has won eight out of his last nine fights, enters the top ten rankings with this win, but said after the fight that he'll be patient and fight anyone the WEC puts in front of him.

"There's no shortcuts in [the WEC]," Taurosevicius said. "This is the best 145 league."