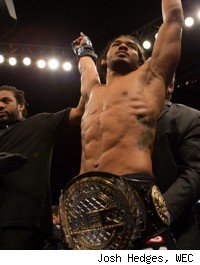 Ben Henderson defeated Jamie Varner to become the undisputed WEC lightweight champion Sunday night at WEC 46 in front of a crowd of 10,270 at the ARCO Arena in Sacramento, Calif.


Henderson defended a double-leg takedown in the third round by applying an arm-in guillotine choke to force a quick tap out at two minutes and 41 seconds.

"As soon as I couldn't get my hands under there [to defend]," Varner said. "I knew I was done."

It was a tough loss for Varner, who returning after a year-long absence, was winning the fight until he was caught in the choke. Varner, a former UFC lightweight, was the stronger fighter and the aggressor against the interim champ.

"I came to fight, Ben was the better man," Varner said. "Caught me in the guillotine. He had a strong guillotine. I wanted to box, he wanted to kick. S--t happens."

In the co-main event, hometown favorite Urijah Faber earned himself a title shot against Jose Aldo by submitting Raphael Assuncao with a rear-naked choke at three minutes and 49 seconds of the third round.

"It was a small mistake scrambling," Assuncao said. "I thought I would be able to get out of it, by giving up my back and controlling his wrist." 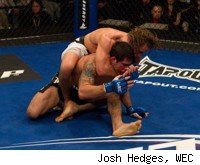 "I'm ready to get that belt," Faber said. "We got a great champion right now. Jose Aldo. He's a phenom. He's both talented and creative. I'd love to go in there and get that belt."

Faber received the Submission of the Night award, a $10,000 bonus to his purse.

Former champion Mike Brown quickly dispatched of WEC newcomer Anthony Morrison with a rear-naked choke at one minute and 54 seconds of round one. Brown said he wants to face the winner of Faber vs. Aldo, but will look to accept the risk to fight rather than sit and wait for a title shot.

Notes: Will Campuzano and Coty Wheeler were each given a $10,000 for participating in the Fight of the Night ... No fighter won the Knockout of the Night award since no one fight ended in a (T)KO ... The WEC is still planning on a pay-per-view sometime in the first half of 2010 ... "Nothing concrete" yet on a The Ultimate Fighter-type reality television show on Versus.