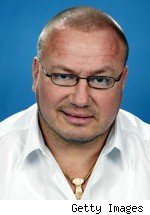 Tony Halme, best remembered in the MMA world as the first opponent of Randy Couture in the UFC, has died at 47, according to The Associated Press.

According to the new organization, Halme was found dead in his Helsinki, Finland apartment, and police say no foul play is suspected.

In addition to fighting mixed martial arts, Halme also performed as a professional wrestler, competing as "Ludvig Borga" in the World Wrestling Federation in the early 1990s. He also boxed professionally, finishing with a 13-6 record.

In May 1997, after fighting a few times in the Japan-based RINGS organization, Halme fought Couture at UFC 13. Couture won by rear naked choke in only 56 seconds. Halme never again competed in MMA.

After his sports and entertainment career, Halme was elected to Finnish parliament, serving from 2003-2007.

In 2003, he was arrested for firearms and drugs violations, crimes for which he eventually received a four-month suspended sentence and a fine. According to Finnish news outlet YLE.fi, Halme was also arrested last year for being under the influence of drugs, and charges were pending at the time of his passing. He was reportedly working on a book about his life at the time of his death.