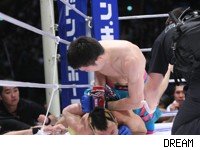 Shinya Aoki has been removed as an instructor at the Paraestra Tokyo in Japan for his antics following his win on New Year's Eve at Dynamite!! 2009.

Yuki Nakai, the general manager of Paraestra, announced Aoki's dismissal on the gym's website and apologized on behalf of the camp for anyone's discomfort from watching Aoki's "inappropriate behavior."

Last week, Aoki was forced to break Mizuto Hirota's humerus bone in his right arm when the Sengoku lightweight champion refused to tap. But instead of checking on his injured opponent, Aoki stood over Hirota, trash talked and offered a middle finger.

On Thursday, Sengoku and the Japan Association of Athletics Federations urged DREAM to take disciplinary action against Aoki to discourage such behavior from others in the future.

Aoki, who will continue to train and represent the gym, added to Nakai's statement by saying that he sincerely apologizes and will avoid such "unsportsmanlike conduct" in the future.