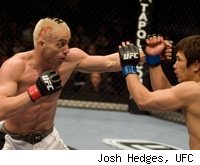 A welterweight bout between Jonathan Goulet and Marcus Davis is in the works for UFC 113 in Montreal, QC, Canada. MMA Fighting has learned that bout agreements have not been signed, but both camps have verbally agreed to the fight.

Goulet, who hails from Victoriaville, QC, which is located outside of Montreal, hasn't competed since December 2008 when he lost via 33-second knockout to Mike Swick. He was scheduled to face Dong Hyun Kim at UFC 100 in July, but a dislocated shoulder suffered in training forced him out of the bout.

Prior to the loss, Goulet had won three fights in a row.

Davis is currently stuck in a two-fight losing streak. He recently lost to Ben Saunders via first-round knockout at UFC 106 after dropping a split decision to Dan Hardy at UFC 99 in June.

The event has yet to be officially announced by the UFC, but Dana White has already publicly discussed the organization's return to Canada. The UFC has previously held two events at Montreal's Bell Centre and are expected to make their debut in Vancouver, BC, Canada, in June.

A light heavyweight title rematch between Lyoto Machida and Mauricio "Shogun" Rua is expected to headline the card.