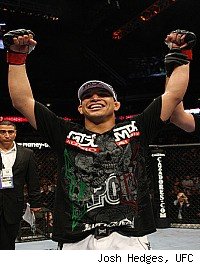 As a 23-year-old with an undefeated record, and an Ultimate Fighter trophy on his mantel, Efrain Escudero is one of the UFC's brightest young prospects.

But Escudero has a lot more work to do before he'll be satisfied with his place in the MMA world: He wants to get to the top of the lightweight division, and on his path toward the top, he spent some time recently with the lightweight champion of the world.

"I was training with B.J. Penn for the Diego Sanchez fight," Escudero told me in an interview this week. "I was with him for a very tough 10 days. I learned everything from him -- his strength and conditioning that he does with the Marinovich brothers, I learned a lot from him as far as technique, and I also picked his brain about how to fight a southpaw."

Escudero said that training with Penn was an eye-opening opportunity to see how he measures up to the best fighter in the world in his weight class, and that he wants to end up where Penn is now: At the top.

"He has the belt," Escudero said. "He's at the top, he knows how to get to the top and stay there, and that's what I'm shooting for. ... That's my goal. If it wasn't my goal I shouldn't be fighting."

Escudero's next step toward that goal is a fight on Monday night with Evan Dunham. The 28-year-old Dunham is 9-0 and would love to show that he, not Escudero, is the UFC's best up-and-coming lightweight. Escudero says he thinks Dunham will be his toughest test to date.

"Cole Miller was my best opponent so far," Escudero said of the opponent he knocked out in his last fight. "I think Evan Dunham is a step up. He's undefeated and he just beat Marcus Aurelio, and if I beat him that represents a step up for me."

Unlike Escudero, Dunham isn't well known among MMA fans, but Escudero says fans should be excited about their bout.

"I'm expecting an exciting fight, a fight the fans are going to want to see," Escudero said. "I've been training hard and I'm expecting him to be in good shape, ready to punch me in the face and I'll punch him right back.

Both Dunham and Escudero are undefeated, which gives their fight an easy marketing angle, but Escudero said he doesn't place too much importance on the zero in his loss column.

"I don't think about my undefeated record," Escudero said. "I know I will probably lose some day and when that happens I just need to keep my head up. All I can do is fight my best, and if someone comes in and beats me I'll react to that: If someone beats me because he's a better boxer or better wrestler or has better jiu jitsu than me then I'll try to take something from that and find out what I need to learn. A loss would hurt me, but that's why I work so hard to prepare myself."

When you talk to Escudero, you encounter a nice, pleasant guy who doesn't want to talk trash about his opponents. He had nothing but positive things to say about Dunham, and he said that if smack talk is what's needed to hype a fight, then count him out.

"Evan and I haven't been hyping the fight like that -- we're not saying anything bad about each other," Escudero said. "We don't even know each other but we're just looking forward to competing."

That's not to say Escudero likes all of his opponents. His season of The Ultimate Fighter was a particularly contentious one, and he said he didn't much care for the housemates he fought on the show.

Escudero would prefer, however, to treat his opponents with respect.

It's a job Escudero is quite good at. He describes himself as a well-rounded fighter whose greatest strength is his wrestling, and he says he thinks he'll be ready to take on a Top 10 opponent by the end of the year -- even though he insists that he won't lobby for any opponent in particular.

"I just love fighting," Escudero said. "I'm young in the sport and I'll fight anybody. I don't want to tell Joe Silva how to do his job but I just want to fight whoever they give me. If I were running out of time, if I didn't have many fights left, maybe I'd be worried about it, but I'm still young in this sport. I'm only 23 and I just need to keep winning."

So far, winning is all Escudero has ever done. If he keeps winning for long enough, he could earn a spot as an opponent -- and not just a sparring partner -- for the lightweight champion of the world.