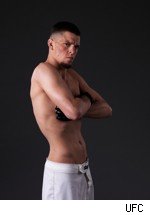 Nate Diaz is a big underdog heading into his UFC Fight Night 20 bout with Gray Maynard on Monday night, with a winning $100 bet on Diaz paying as much as $270. This despite the fact that Diaz and Maynard have squared off before, and Diaz won that one, submitting Maynard in the second round of their bout on Season 5 of The Ultimate Fighter.

The reason, of course, is that Maynard was new to the sport when they fought three years ago, and he has improved significantly since then. Even Diaz, who doesn't often have kind words to say about his opponents, acknowledged that on Friday.

"Gray has definitely gotten better since the last time I fought him," Diaz said. "But I've been getting better too. I've been training hard and I'm ready to win, to whip his ass."

If Diaz does whip Maynard's ass, it would cause a significant shakeup in the UFC's lightweight division. Maynard is currently considered one of the top 10 lightweights in MMA, and he might even be next in line for a shot at the champion, B.J. Penn, if he beats Diaz. But a Diaz win would end any talk of Maynard getting a title shot, would probably assure Frank Edgar of the next shot at Penn, and would hand Diaz the biggest win of his career.

However, there's a reason Maynard is such a heavy favorite: He has shown steady, consistent improvement with every fight since he was a relatively green Ultimate Fighter cast member. Maynard said he thinks Diaz has improved, too, but that he's ready to show he's taken greater strides.

"We both have grown a lot," Maynard said. "We've both been going up against tough guys. You can't say it's going to go like the last time. It's a new fight, I'm prepared, he's prepared too and it's going to be a good fight."