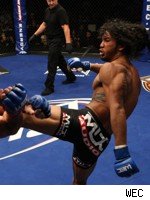 Each carrying a WEC title under shaky terms, Jamie Varner and Ben Henderson will meet Sunday in the main event of WEC 46 in Sacramento, Calif. to establish the No. 1 lightweight in the WEC.

"Ben's got to prove he's deserving," Varner said Tuesday of the interim champ on a media call. "He's got to show that belt and that fight it's not just a paperweight. That he actually deserves it; he earned it."

That said, the 25-year-old current champ admitted he is facing a similar situation.

Varner fought just under a year ago, retaining his belt in a fight that came to an end midway through the fifth round when he was struck with an unintentional illegal knee by challenger Donald Cerrone. Varner couldn't continue and won the fight by technical split decision. Though attempts for a rematch were made, Varner was sidelined for practically the rest of the year due to injuries.

"I got this belt but I haven't fought in a year and I got to prove myself to everybody because of the controversial ending of my last fight," said Varner, who is 4-0 in the WEC. "I have to show everybody why I'm the world champion and I have to kind of remind people who the real Jamie Varner is."

In his absence, the WEC decided to crown an interim champion with Cerrone receiving another shot at the belt in a showdown against rising star Henderson. In one of the best fights of the year, Henderson won a close decision after five back and forth rounds for the rights to wear the strap. Although he's technically a champion, Henderson points to Varner as the true champion.

"Jamie and I, we both know," Henderson said. "I have the interim belt, but Jamie has the belt. He has it, I want to go get it, so we both understand that among ourselves that we know what the real deal is."

Varner thinks Henderson deserves to be a champion, but wasn't pleased with the decision to implement an interim title when he could have returned within a one-year time frame.

"I broke my hand, I broke my foot in the cage fighting for the organization that I love," Varner said. "I let it all hang out. Blood, sweat and tears. Hours, countless hours in the gym training.

"When Frank Mir got in his motorcycle accident and broke his leg," Varner continued. "He was out for two years. That took place outside the cage so I can understand the interim title. For me, I worked hard, I fought my butt off and the fact was, we were a couple of months short. Realistically, they could have made that a No. 1 contender fight and not made the belt."

Rather than dwelling on having to share the top status in the 155-pound division, Varner commended Henderson for his exciting fight against Cerrone and leaned on the benefit of Henderson holding an interim title.

"It adds a little more drama," Varner said. "It's pretty cool, we got all the hype going cause we're unifying the belt."