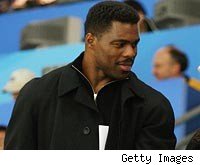 Herschel Walker finally has an opponent for his Jan. 30 mixed martial arts debut in Strikeforce.

Barring any issues, the former NFL star and Olympic bobsledder will transition into the combat sports world against Greg Nagy, Strikeforce representative Mike Afromowitz confirmed to MMA Fighting. News of the potential opponent was first reported by UltMMA.com.

Afromowitz told MMA Fighting that Nagy has been approved as an opponent by the Florida athletic commission, and only needs to be approved by Strikeforce's broadcast partners at Showtime. The latter is expected to be a formality.

The 26-year-old Nagy is 1-1 in his career, defeating Robert Prinicipato in his career debut last August before dropping a decision to Francisco Navarro three months later. Nagy reportedly trains in Arizona.

Walker made headlines last fall when he announced he'd enter the world of MMA at 47 years old. A former Heisman Trophy winner at the University of Georgia, Walker had an accomplished pro football career. A onetime USFL MVP, Walker rushed for nearly 14,000 combined yards in the USFL and NFL.

In the NFL, he was a two-time Pro Bowl selection and rushed for 8,000 yards. He is also remembered for being the key cog in one of the most famous trades in sports history, when the Dallas Cowboys traded him to the Minnesota Vikings in a deal that helped the Cowboys rebuild their franchise into one of the winningest teams of the 1990s.

In preparation of his MMA debut, Walker has been training with San Jose, Calif., based American Kickboxing Academy. He is also a sixth-degree black belt in tae kwon do.

Walker will be on the televised portion of the card, which also features a welterweight title fight between Nick Diaz and Marius Zaromskis as well as a women's championship fight between Cristiane Cyborg Santos and Marloes Coenen.