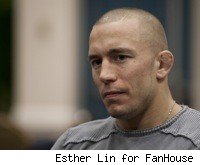 The build up to Georges St-Pierre's upcoming title defense against Dan Hardy at UFC 111 reminds the champion a lot of his fight against Matt Serra at UFC 69. Prior to that fight, most believed it was a foregone conclusion that St-Pierre would easily defeat Serra. Of course, the exact opposite happened.

So that's why St-Pierre refuses to buy into the theory that Hardy has no chance of defeating him, and that's why he told a media gathering last week in Las Vegas that Hardy will be his most dangerous opponent to date. GSP has used that line before, but when you listen to him talk about Hardy, you get the sense that he has as much to prove in this fight as "The Outlaw" does. Check out the video below.