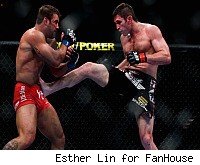 After winning The Ultimate Fighter 7, Amir Sadollah was on the shelf for more than a year because of injuries. So now that Sadollah is preparing for his next fight at Monday's UFC Fight Night 20, he says he's itching to get back into the Octagon -- even though it gives him just 50 days off since his last fight.

"I'm never satisfied," Sadollah said. "My career to this point has been challenging, but that's what I expected. ... I had two fights that I couldn't compete in, but all that time off forced me to learn more about myself and learn more about training and it made me push through difficult things. I learned lessons and I've used those lessons in my last couple of camps."

Sadollah's professional MMA record is just 2-1, and he's so inexperienced in the sport that if he were to apply for The Ultimate Fighter now, the UFC would likely tell him his resume is lacking. But he said he's eager to keep fighting and build up that resume, starting when he steps into the Octagon against Brad Blackburn Monday night on Spike TV.

"This is the right timing," Sadollah said of the quick turnaround. "It's allowing me to readjust but also stay busy. I've had long layoffs before and didn't like them so I think things are working out well."

Sadollah was happy to defeat Phil Baroni in his adopted hometown of Las Vegas at UFC 106, but he said he's particularly excited about fighting in Fairfax, Virginia for UFC Fight Night. Sadollah was born in Brooklyn but moved to Virginia as a small child and lived most of his life there.

"Fighting on this card was talked about even before the fight with Baroni," Sadollah said. "Having me fight in Virginia makes sense, and since I came through the Baroni fight with no injuries I'm ready to go. ... It's the first time the UFC has been in Virginia and I'm very glad to be a part of it. I definitely consider Virginia home."

The UFC sometimes gives Ultimate Fighter winners easy opponents to help build them up as prospects, but Sadollah says he doesn't think that's the case with Blackburn, who is 3-0 in the UFC.

Sadollah says his own style as a fighter is more about finding the right way to beat any individual opponent than it is about having any particular strength or weakness.

"I think I'm good at most things and can get better at everything. I shouldn't be satisfied with any part of my game. I should just be trying to get better. My first instructor was a sambo guy, although he used more of an American hybridization. I've mixed in some wrestling and jiu jitsu with sambo, judo and striking."

Even through the long layoff in which a staph infection and a broken collarbone kept him out of the Octagon, Sadollah said he never got down on himself, and he never questioned whether he wanted to fight.

"One of the things that drew me to fighting is that there's never been any question about my motivation," Sadollah said. "I'm always looking for how I can get back and how I can get better, and getting down was never an issue."

And now, as he prepares to fight in his home state, in front of family and friends and a live TV audience, Sadollah said he thinks he's ready to be the best he's ever been.