WEC 46 Could Be Biggest Fight of Urijah Faber's Career 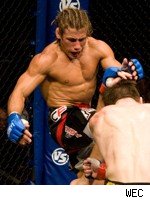 Urijah Faber's fight on Sunday night is, in some ways, the biggest of his career.

At first that might sound crazy: Most of the fights in Faber's mixed martial arts career have been for one championship belt or another, but his bout with Raphael Assuncao is a non-title fight. And Faber vs. Assuncao isn't even technically the main event on Sunday night, although it is surely the bout that is drawing the most fans to Sacramento's Arco Arena.

But Faber is, more than at any other point in his MMA career, at a crossroads as he prepares to battle the dangerous Assuncao: If he wins, his next fight will be for a shot at the featherweight belt which he once owned but which is now possessed by Jose Aldo. If Faber loses, however, it will be fair to ask whether he is, at age 30, on the down side of his career.

WEC General Manager Reed Harris said he'd prefer to wait until after the Faber-Assuncao fight before he says what's next for the winner, but he sounds excited about the possibility of getting Faber back in a title fight.

"We've definitely had that discussion," Harris said. "We always like to wait until after the fights, but we had that discussion last week, and I think that's something we look forward to doing. Depending on who wins this fight, I think we'll try to make that fight."

After spending six months recovering from hand injuries suffered in his loss to former champion Mike Brown, Faber said he's excited at the prospect of getting a new shot at a new champion.

"I'm ranked number three in the world and Raphael is ranked number five, so I would assume this is the spot for the number one ranking," Faber said. "I'd love to have that shot, but it's up to the guys in the WEC."

Faber has already lost twice to Brown, and it would have been tough for the WEC to sell fans on a third Faber-Brown battle. But when Aldo defeated Brown in November, that opened the door to Faber returning to title contention. Faber said he saw Aldo's victory coming.

"I thought that Jose Aldo was going to win," Faber said. "I thought Aldo was going to win and I thought I was pretty close to a title fight, but I'm just happy that we've defined who the best guys are right now. Jose Aldo, without a doubt, has proven that he's the champ right now, so that's the guy I want to beat. Before then, I've got a very difficult opponent in Raphael. I don't want to get too excited about fighting Aldo yet because I've got another hard-headed Brazilian to try to throw around."

Assuncao, of course, would love nothing more than to get a title shot of his own, and he thinks that if he can prove himself on Sunday night, he'll be the one fighting Aldo later this year.

From a business perspective, the WEC would certainly prefer to see Faber back in title contention. Faber is a charismatic, likable guy who has long been the promotion's biggest star, and any title fight involving Faber would be a major event for the WEC. But Harris says the WEC doesn't play favorites with Faber.

Faber wants 2010 to be the year he shows again that he is one of the top guys in the world -- and the best in the world in MMA's featherweight division.

"I'm expecting a game performance," Faber said. "And hopefully I'll have the belt midway through 2010.