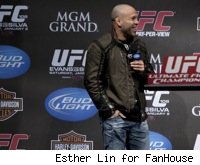 If you're wondering why Wanderlei Silva is so beloved by MMA enthusiasts, just watch the video below of his recent question-and-answer session with UFC fans in Las Vegas. Silva, who has produced some of the most brutal knockouts in MMA history, showed an extreme kindness and humility in talking to the people, which is not what you would expect from someone nicknamed "The Axe Murderer."

Some of the topics Silva talked about were his upcoming fight against Michael Bisping at UFC 110, his favorite fights and why he is no longer striving for a fight against Anderson Silva.