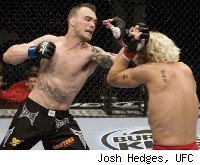 George Roop can still remember the time in the hospital. Hours stretching to days, days stretching to weeks. He can remember his infant son's body going limp, Julian dying in his arms; the doctors frantically breathing life back into him.

It was then that those same doctors told him that his child wouldn't live long, that he might not ever make it out of that hospital.

Julian Blaze Roop proved them wrong, made it seven years on this earth, through scores of tests and countless appointments with baffled doctors who couldn't understand how he continued to grow. His heart finally gave out in Oct. 2009, his dad's heart breaking with it.

George Roop, however, still had a job to do. Shortly before his son died, the professional mixed martial artist had talked to officials from the WEC, who'd told him if he won his Rage in the Cage fight in Nov., he'd soon have a job with them. To Roop, also the father of four-year-old twins Tristan and Nya, the decision was simple: like Julian had done all those years, he'd soldier on.

That Roop could continue with training camp was amazing; that he could win his fight with so much on his mind and so much at stake seems downright miraculous.


"I look up to him. I don't think I could have done it," said Roop's trainer Shawn Tompkins. "Anyone who hears the story has to know he's a special person for it. But if you look deeper and get to know George, that's the kind of guy he is."

The 28-year-old Roop wasn't always that guy. Though a tae kwon do black belt at a young age, by the time he reached his teenage years, he was running around with the wrong crowd, getting into fights, even going through a stint at juvenile hall.

Fighting though, turned his life around, when it became less about the streets and more about the honor and discipline. It became his outlet and his future. So when Julian passed away, being in the gym and concentrating on fighting just felt right.

"MMA has been my route out of a lot of stuff throughout my life," he said. "It's been a continual change for me. Whenever I'm having hard times, I feel like I'm free of it when I'm in the gym. I get to let all my aggression out, and I feel good about what I'm doing."
Share

Even still, Roop says he'd be lying if he said he doesn't sometimes catch his mind wandering to Julian while in the gym.

When he was just a month old, Julian had suffered a brain infection that led to brain damage and seizures. The seizures came constantly, and sometimes throughout the day.

"He fought every minute of his life. For seven years, people told him he couldn't live, but he kept living," Roop said. "I'm supposed to be a fighter but compared to him, I'm a paper-pusher. That kid, he was a true warrior. He had to go through the fight every single day."

The son and the father, they have that fighting spirit in common, so Roop says he believes that Julian would have wanted him to continue moving forward.

In his Rage in the Cage fight against Matt Dell just a month later, Roop dropped down to 145 pounds to compete as a featherweight and controlled the action from start to finish in gaining a unanimous decision. As promised, the WEC contract came with it.

"It was of course very hard losing Julian, but winning was an absolute necessity to me," he said. "Winning every fight is a necessity to me. When I say I'm going to do something, I go 100 percent towards it, regardless of the situation that surrounds me. I definitely felt like I had to win in order to propel myself into a bigger organization where I could make a bit of a living."

Amazingly, the 6-foot-1 Roop (10-5), who normally walks around at 170 pounds, decided that he could drop yet another weight class, so he'll make his WEC debut at 135 pounds. To get there, Roop is consuming only between 500-800 calories a day. As if he hadn't sacrificed enough, through the holidays, as friends and family around him were gorging and feasting, Roop was munching on rice cakes, or chicken breasts or salads.

His rookie effort as a bantamweight will come on Sunday against Eddie Wineland, a former WEC bantamweight champ who is coming off a win against Manny Tapia.

For Roop, it's sort of a reinvention of himself. He first came to prominence on season eight of The Ultimate Fighter, where competing as a lightweight, he defeated Roli Delgado and John Polakowski before losing to Phillipe Nover in the semifinals. Moving on to the main UFC roster, Roop went 1-2, sandwiching a decision victory over Dave Kaplan between losses to Shane Nelson and George Sotiropoulos.

Few fighters have dropped down two weight classes – and truthfully, few fighters could – so Roop's move presents an unusual though calculated risk.

"He's going to be a very dominating force at 135," said Tompkins, who began training Roop about six months ago. "He's over six feet tall and fighting at 135? That's a pretty special thing."

Roop moved to Las Vegas from Tucson, Ariz., specifically to challenge himself and receive specialized training (he also has jiu-jitsu wiz Robert Drysdale as a coach). So in a sense, this fight with Wineland is the culmination of his shifts in geography and weight.

As fight storylines go, his reincarnation as a bantamweight, of course, pales in comparison to the personal tragedy he endured.

Julian's is a life that will be with him always, whether he fights at 135, 155 or super heavyweight, a spirit that he will take with him to the gym, to the grocery store, and yes, to the cage. Even when the door shuts behind him on Sunday night and his mind shifts focus on the task ahead, the lesson that a seven-year-old taught a grown man will ring in his subconscious.

"He had the purest heart of any kid to walk the earth," Roop said. "He was incredible and strong, the most loving kid you could ever have. And he taught me one thing: you always keep going."