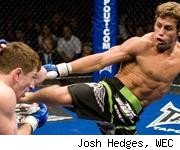 The bad news is that, according to numbers released Wednesday by the Nevada State Athletic Commission, the promotion's most recent event, WEC 45, had a total gate of just $102,700. That's a relatively weak number, as are the ticket sales figures that show just 926 tickets were sold, while 815 tickets were given away and 450 tickets were unused. That represents a decline from the promotion's previous two events in Las Vegas: WEC 44 had a gate of $131,000 on 1,132 tickets sold, and WEC 42 had a gate of $175,835 on 1,640 tickets sold.

The good news is that Urijah Faber is returning to the cage on Sunday.

If you have any doubt about Faber's status as the promotion's biggest draw, compare those numbers above to the live gate for Faber's last fight, against Mike Brown at WEC 41: The gate for that event was $815,415 on 10,110 tickets sold.

That WEC 41 show, like this coming Sunday's WEC 46, was in Faber's hometown of Sacramento, where he's a major star. Basically, the WEC is in a position where shows in their headquarters of Las Vegas -- even shows with big fights like Mike Brown vs. Jose Aldo -- can't draw anything close to the live gate that Faber can draw in Sacramento.

That's why keeping Faber happy is so important for the WEC: Whether he's the featherweight champion or not, he's the only fighter in the promotion who has that kind of drawing power.

And that's why the great news for the WEC is that Faber is under contract for six more fights after Sunday. The WEC has locked up its biggest draw for a long time. It needs him.