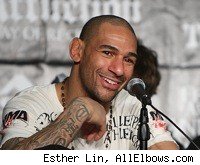 On this week's edition of The MMA Hour, we were first joined by KJ Noons, one of the newest members of the Strikeforce lightweight roster. Noons announced that he would not be fighting the injured Billy Evangelista on the upcoming Strikeforce: Miami, but was holding out hope that he could make his Strikeforce debut soon. He also talked about his falling out with EliteXC and juggling his MMA and boxing career.

We later spoke to Mike Brown, who will face Anthony Morrison at WEC 46 on Sunday night. Brown said that following his featherweight title loss to Jose Aldo in November, he begged WEC officials to get him back into the cage as soon as possible. He also shed some light on an identity theft incident he has had to deal with recently. Finally, we were joined by Strikeforce welterweight Jay Hieron, who will be facing Joe Riggs on Jan. 30. "The Thoroughbred" talked about the upcoming fight and why he believes Nick Diaz is ducking him. Watch or listen to the show below.