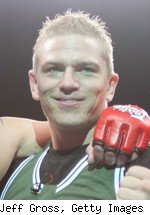 For renowned MMA trainer Shawn Tompkins, the transition from Xtreme Couture to the TapouT Training Center has been smooth, even though it can sometimes lead to seemingly awkward situations.

For example, Tompkins is currently in the midst of training MMA legend Mark Coleman for his upcoming fight at UFC 109. Nothing awkward about that, right? Well, maybe this: Coleman will be squaring off against Tompkins' former boss, Randy Couture. "It's just business," Tompkins said of the upcoming bout. "Anyone who's ever spoken to Randy, as far as competition, that's how he feels, too.

"For Randy, it's about the fight, not the drama," Tompkins continued. "He's real cool about it. We talked about it. I let his camp know first. I started working with Mark for the Stephan Bonnar fight [at UFC 100]. I have my own team now, and this is how I make my living and how my family survives, so if Mark Coleman comes to me and asks me to coach him in a matchup against another UFC Hall of Famer, I'm going to say yes. It's nothing personal. It should happen for the sport and the fans, and when it's all said and done, Randy and I will still be friends, and I'll still respect him for everything he's done for me."

Tompkins left Xtreme Couture in October, mainly for the opportunity to run his fight team his own way, he said.

At Xtreme Couture, many fighters would come in with their own coaching staffs; at TapouT, he is the head coach and is responsible for bringing in other coaches to work with his fighters.

"One thing that didn't really work well for me at Xtreme Couture was every fighter having their own staffs," he said. "If you're going to take this sport seriously, that doesn't seem to work out too well. I've always had my own thoughts on the best way to do it. Now these fighters that are training with me at TapouT are with me specifically as a part of Team Tompkins. What it comes down to is we get to coordinate and make sure they get what's best for them."

When he walked through the front door of the TapouT facility, which is just two miles from his former home at Xtreme Couture, Tompkins brought a stable of fighters with him. Along with Coleman, there's also UFC No. 1 middleweight contender Vitor Belfort.

But Tompkins made it his primary goal to focus mainly on younger fighters and shepherd them to a championship level. To that end, also on his roster are unbeaten lightweight Evan Dunham, 22-year-old WEC featherweight Chris Horodecki, Junie Browning, George Roop and more.

All told, Tompkins has over 20 pro fighters on his fight team now.

"It's the best decision I've ever made," he said. "It's nice as a coach to have the freedom to make my own decisions and build the fighters the way I think they should be built."

In addition, as Tapout ramps up production of their training centers nationwide, Tompkins will be responsible for training and certifying all coaches. He's already certified five coaches but plans to ramp up that front in the spring.

Until then, he'll focus on his many fighters, including Belfort, who is expected to face off with UFC middleweight champion Anderson Silva sometime around April or May.

Tompkins said that while Belfort is currently in Brazil training with Lyoto Machida's camp, he is expected to return back to Las Vegas in about 10 days to begin putting together his game plan for Silva.

Silva has repeatedly implied that Belfort is not deserving of a title shot, and has seemed to indicate that Belfort betrayed his friendship by accepting a fight with him. Though "the Spider" has seemingly made the fight personal, Tompkins says Belfort won't allow himself to do the same.

"No fight will ever be personal to Vitor," he said. "He's not that type of person. He does things for God and family, and there's no person out there who's going to make it personal for him. He just would never allow that to happen. There's fighters who need that to perform, and I think Anderson Silva's always been one of those fighters. It's showed in the past, but Vitor's very self-motivated. He respects Anderson for who he is."