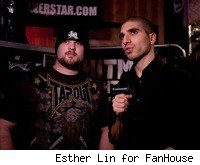 MMA Fighting caught up with The Ultimate Fighter 10 winner Roy Nelson at a recent autograph signing in Las Vegas to talk about how life has changed for him since winning the reality show.

"Big Country" said that he was hoping to return to action in either March or April, but he would really like to fight on the April 10 Abu Dhabi card because he received his Brazilian Jiu Jitsu black belt from Renzo Gracie, who will be making his UFC debut against Matt Hughes on that card. Nelson also weighed in on his place in the heavyweight division and shared some of his goals for 2010. Check out the video interview below.