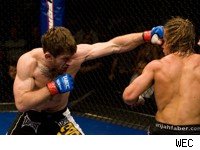 When Mike Brown lost his World Extreme Cagefighting featherweight championship to Jose Aldo in November, he didn't take any time to sulk. He just went to the gym.

"I just went straight back to it -- I didn't even take time off," Brown said this week, as he prepares for his return fight on Sunday night. "Six days later I was already back in the gym hitting the pads. If I lose I'm always motivated to get back to it as soon as possible. If I win I feel like I can relax but if I lose I just want to get back to it."

Brown was on a 10-fight winning streak spanning four years before Aldo came along, but he said he didn't allow himself to get down about his loss.

"I'm OK," Brown said. "I've felt worse before after losses -- I've gone into a depression before after losses. It's part of the game. I don't want to lose but I lost to a tough guy and I've just got to re-calculate things, figure out where my mistakes were and come back stronger."

Said WEC General Manager Reed Harris, "Mike called me literally the day after that fight and said, 'I want to get back into the cage.'"

When Brown says he's coming back stronger, he means that physically: He says he's taken a renewed interest in building muscle in the gym, and that in his preparation for five-round title fights, he thinks he focused so much on having enough cardiovascular endurance that he lost about five pounds from his peak walking-around weight and some muscular power.

"I know what went wrong," Brown said. "I changed my training a little bit. I changed my pace trying to be ready for five rounds, training more like a long-distance runner, and I sacrificed some of my power. I need to get back to becoming the kind of fighter who can beat someone in the first two minutes of the fight. I need to just go berserk."

On Sunday Brown will face Anthony Morrison, who has a 12-6 record and is making his WEC debut. That's a big step down from the likes of Aldo and Urijah Faber, whom Brown beat once in 2008 and again in 2009. But when I mentioned to Brown that I don't think Morrison is an elite opponent, he would have none of it.

"I don't think so," Brown said. "If you watch the tape, he's tough. In this sport you can't look past anyone. Just because he hasn't been on TV doesn't mean he's not a good fighter. I've been watching some of his fights on YouTube and I think he's really, really tough."

Brown described Morrison as a good athlete with good MMA fundamentals, and he said he thinks he's in for a real challenge on Sunday.

"He's quick, he's fast, he hits hard, he has a good double-leg takedown," Brown said of Morrison. "He does all the basic things right. He's coming off a big win, he knocked out Alvin Robinson in just a minute and he looks to me like he's improved dramatically."

Brown is likely two fights away from getting another shot at the featherweight title: He'll likely need to beat Morrison on Sunday and then win one more fight before the WEC would give him achance at reclaiming his belt. But Brown said that's not what he's thinking about at the moment.

But even if Brown is heading into the Morrison fight with the mindset that it's the biggest of his career, the reality is that Brown became a fighter because he wants to compete with the truly elite opponents in his weight class, and he hopes to conquer some big challenges in 2010.

"At this point in my career I want to fight the best guys in the world and the best in the world are in the WEC," Brown said. "This is my prime, and I have to use up this body now, and I want to do that by fighting the best out there. It's time to put myself back in position. I want people to know that I'm not playing around and I'm going to climb that mountain one more time."