Lawler vs. Manhoef, Riggs vs. Hieron Confirmed for Strikeforce: Miami 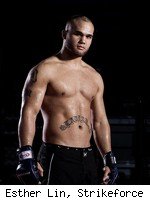 Robbie Lawler vs. Melvin Manhoef and Joe Riggs vs. Jay Hieron have been approved for the Strikeforce; Miami card on Jan. 31 in Sunrise, Fla.

MMAFighting.com has confirmed the fights with Strikeforce along with three of the undercard bouts.

Former EliteXC middleweight champion Lawler was supposed to fight last month on the Strikeforce: Evolution card, but opponent Trevor Prangley had to bow out due to injury. He'll be matched up with another heavy puncher Melvin Manhoef, who is coming off a victory over Kazuo Misaki on New Year's Eve at Dynamite!! 2009 in Japan.

Jay Hieron lost out on a chance to fight for the belt when Marius Zaromskis was paired with Nick Diaz to fight for the Strikeforce title, but he could be next in line if he gets past Joe Riggs. Hieron, the final IFL welterweight champion, debuted for Strikeforce last August and won a decision over Jesse Taylor.

Riggs was last seen with Strikeforce in June, beating Phil Baroni by unanimous decision. He took fights for Rage in the Cage last month and won both quickly in the first round.