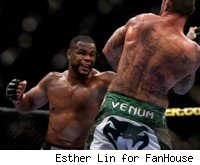 Rashad Evans probably doesn't get enough credit as one of the truly elite athletes in mixed martial arts. Maybe after his win on Saturday night over Thiago Silva at UFC 108, he will.

Evans showed off his excellent wrestling base in repeatedly taking Silva down on Saturday night, and although he nearly lost the fight in the third round, he showed a lot of heart in weathering some powerful combinations from Silva, one of the light heavyweight division's most dangerous strikers.

And so, even though he needs another win or maybe two before he'll be back in title contention, I have Evans in my list of the Top 10 pound-for-pound fighters in the world, which is below.

Top 10 Pound-for-Pound fighters in MMA
1. Fedor Emelianenko: The best fighter on the planet is expected back on CBS in April, most likely against Fabricio Werdum.

2. Anderson Silva: Silva may fight in April as well, as that's the month he's likely defending his UFC middleweight belt against Vitor Belfort.

3. Georges St. Pierre: He'll defend his UFC welterweight championship against Dan Hardy as the main event of a stacked UFC 111 card in March.

4. B.J. Penn: The UFC's lightweight champion is so dominant that the promotion is going to have a hard time finding a credible challenger for his belt. It's not clear when Penn will fight next.

5. Lyoto Machida: He's slated to take on Shogun Rua on May 1.

7. Brian Bowles: The WEC bantamweight champ will have his first title defense against Dominick Cruz on March 6 at WEC 47.

8. Mauricio "Shogun" Rua: He acquitted himself nicely in his first bout with Machida, but he'll still be an underdog going into the rematch.

9. Rashad Evans: His upcoming fight with Rampage Jackson is about as big a non-title fight as the UFC can make.

10. Miguel Torres: He'll fight Joseph Benavidez at WEC 47, with the winner of that bout likely getting the Bowles-Cruz winner this summer.