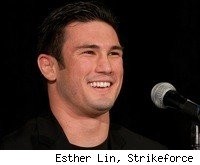 A lightweight fight between KJ Noons and Billy Evangelista has been scrapped from the upcoming Strikeforce: Miami card. Noons confirmed the news with MMA Fighting on this week's edition of The MMA Hour, which will air on the Web site on Wednesday.

Noons (7-2) said he was recently informed by the organization that Evangelista suffered an undisclosed injury injury in training, forcing him to withdraw from the fight. The former EliteXC 160-pound champion added that he has been placed on standby for the Jan. 30 card in case someone else gets injured, but if that doesn't happen, he will make his Strikeforce debut in either March or April.

Noons recently signed a new multi-fight deal with the San Jose-based organization last month. He last competed in MMA in June 2008, when he defeated Yves Edwards to retain his EliteXC belt. Following the victory, Noons and EliteXC could not reach an agreement on a new deal, and he was eventually stripped of the title before the organization folded in October 2008.

The 27-year-old also announced that Mark Dion is no longer his agent and that he now represents himself. Dion had been the target of criticism from former EliteXC vice president Jared Shaw during the negotiations.

Since leaving MMA, Noons returned to boxing, where he compiled a 4-1 record. His overall boxing record is 11-2, and he said his new deal with Strikeforce will allow him to continue to pursue his goal of being a two-sport champion.

Evangelista recently defeated Jorge Gurgel on a Strikeforce Challengers card, improving his record to 10-0 (1 no contest.)

Official fights for the upcoming Strikeforce: Miami card include Cris Cyborg vs. Marloes Coenen, Nick Diaz vs. Marius Zaromskis and the Strikeforce debuts of Herschel Walker and Bobby Lashley against yet to be announced opponents. The event airs live on Showtime.