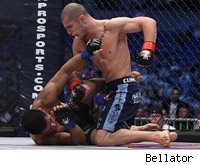 Continuing their wave of quality signings, Bellator has inked a deal with highly regarded featherweight prospect Georgi Karakhanyan, the company confirmed on Tuesday.

The 24-year-old is 12-1-1 in his pro career, with eight straight wins. In addition, he shows the ability to finish, as 10 of his wins come via TKO or submission.

Karakhanyan, who was born in Russia to Armenian parents before moving to the U.S., formerly played professional soccer in the Major Indoor Soccer League before transitioning full-time into MMA.

The son of a karate black belt, Karakhanyan has been involved with martial arts throughout much of his life, and has already evolved to a brown belt in Brazilian jiu-jitsu despite beginning his training in the art form in 2006.

Karakhanyan had been considered one of the top unsigned prospects in MMA, and had previously spoken with the WEC before signing with Bellator.

"With 12 wins and just one loss under his belt, Georgi is a proven winner," Bellator founder and CEO Bjorn Rebney said in a statement. "He brings an explosive style to the cage that makes for great fights. We are excited to welcome Georgi to Bellator."