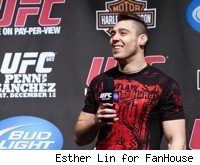 The UFC on Monday officially announced the top two fights for UFC 111, to be held at the Prudential Center in Newark, N.J.

As first reported by FanHouse in Nov., in the main event, welterweight champion Georges St. Pierre will defend his belt against No. 1 contender Dan Hardy. And in the co-main event, Frank Mir will battle Shane Carwin for the interim UFC heavyweight championship.

St. Pierre (19-2) has been on the sidelines recovering from a groin injury since dismantling Thiago Alves at UFC 100 in July 2009. Meanwhile, Hardy (23-6) bolted to the top of the welterweight contenders list with seven straight wins, including four in the UFC, most recently defeating Mike Swick at UFC 105.

Mir and Carwin will face off for the interim belt in the wake of champion Brock Lesnar's illness. Lesnar has suffered from a serious intestinal issue, and while he is expected to be re-evaluated this week, his fighting future remains in doubt.

The unbeaten Carwin (11-0) had been scheduled to fight Lesnar for the championship before Lesnar was sidelined. Instead, he'll face Mir (13-4), who crushed Cheick Kongo in a first-round submission victory at last month's UFC 107.

The event will take place on March 27.