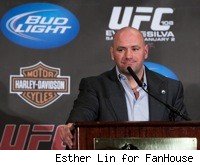 Following the UFC 108 post-fight press conference on Saturday night, Dana White dropped a subtle bombshell that he had recently talked to M-1 Global representatives. Unfortunately for the assembled media, White would not elaborate on the extent of his conversations, but the UFC president did reiterate that he would love to bring in Fedor Emelianenko and Gegard Mousasi -- both M-1 contracted fighters -- into the UFC mix.

Of course, the M-1 vs. UFC co-promotion issue has been well-documented, and when Emelianenko was a free agent over the summer, both sides couldn't work out a deal, which led to "The Last Emperor" signing with Strikeforce.

Below is a video of White talking about the situation.