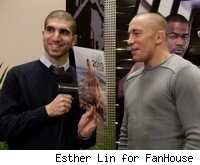 When Georges St-Pierre first brought up the fact that he would be interested in making a run at the Canadian Olympic wrestling team, most believed it was just a pipe dream. But the closer we get to the 2012 Summer Olympics, the more St-Pierre seems to be talking about vacating his UFC welterweight to make a serious run at making the team and competing in the games.

MMA Fighting spoke to St-Pierre recently about how close he is to making his Olympic decision, as well as his upcoming title defense against Dan Hardy at UFC 111 in March. St-Pierre also responded to Hardy's recent trash talk and discussed whether he feels Hardy is a worthy title contender. Check out the video interview below.