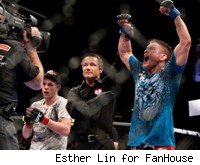 On his personal web site, Joe Lauzon has shown all MMA fighters the right way to act after a loss: Relax with some junk food (in Lauzon's case, he posted a picture of himself sitting in bed eating In-N-Out burgers) and congratulate your opponent.

"Great job Sam," Lauzon wrote in a message to Sam Stout, who beat him Saturday night at UFC 108. "You whooped my ass tonight. I thought I had the Kimura in the first round and thought it was over ... but you had other plans. Your standup was crisp and your cardio was way better than mine. I could hear your corner calling out stuff and still couldn't deal with it."

Although Lauzon took a beating for the latter portion of the fight, he said he feels good.

"I am doing fine this morning," Lauzon wrote. "I have a pretty nasty canvas burn on my right knee from shooting in ... but I feel okay otherwise. My left eye is a little swollen and my left leg feels like I was kicked about 50 times. Overall ... I am doing alright."

The message on Lauzon's web site is pure class, and it ends with, "Great job, Sam."