Brock Lesnar's Future Could Be Decided This Week 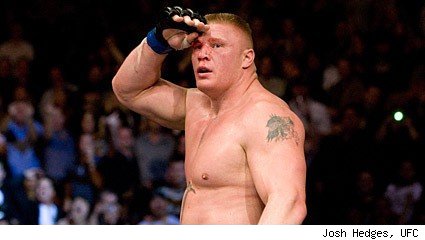 A clearer picture of the future of Brock Lesnar's MMA career should emerge this week when the champion is admitted to the hospital again for further examination, UFC president Dana White told the press Saturday.

"This is the week," White said. "This week Brock Lesnar is going back to the doctor, getting fully checked out by one of the best doctors and hospitals in the world. So this week I'll know -- hopefully."

White will determine how to approach the company's heavyweight division once he is made better aware of the status of Lesnar's health and whether Lesnar will be available in the immediate future or even at all.

For now, the UFC will go ahead with a Frank Mir vs. Shane Carwin fight for the interim heavyweight belt at UFC 111 in Newark, N.J.

Lesnar is the UFC's biggest draw, but White insists business is the least of his concerns, reiterating the gravity of the situation.

"I'm not looking at Brock and saying now that he's gone we're going to lose all of these pay-per-view buys," White said. "What I'm thinking about is that I hope Brock is going to be okay. If he has to have this major surgery, we're talking about changing the quality of this guy's life forever.I like him, I respect him and I hope that doesn't happen for him and his family's sake."