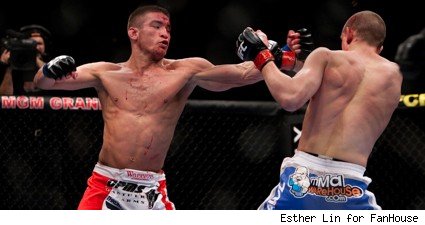 Tyson Griffin, who has five career Fight of the Night bonuses, is facing some new competition. The Shawn Tompkins-trained Stout won his second straight Fight of the Night with his superior striking against Lauzon in the second of three decisions of the evening. Stout stuffed takedowns in the later rounds and scored on the TUF 5 lightweight with a variety of punch and kick combinations.

Daley won the Knockout of the Night despite failing to make weight. Anthony "Rumble" Johnson lost out on a Knockout of the Night award at UFC 104 in October for missing weight, but it appears Daley will be an exception. UFC president Dana White said there were no losers on this UFC 108 card and that not only with no one be penalized, but no fighters will be cut.

Daley said at the post-fight press conference that he could have made weight but wasn't allowed to do so by doctors.

Miller weathered a nasty left hand to beat Dan Lauzon with a crafty submission for Submission of the Night. The American Top Team lightweight recovered to finish Lauzon with an inverted triangle choke and kimura hold.