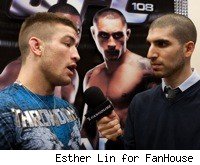 LAS VEGAS -- Sam Stout kicked off 2010 right where he left off in 2009, picking up a UFC 108 Fight of the Night award for his victory over Joe Lauzon after winning the same award following his win over Matt Wiman last April.

MMA Fighting spoke to "Hands of Stone" at the post-fight press conference about getting his career back on track and his performance against Lauzon.