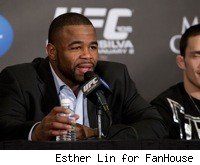 LAS VEGAS -- Rashad Evans met with the media following his UFC 108 victory over Thiago Silva on Saturday night, and reflected on his first victory since losing the light heavyweight title to Lyoto Machida in May.

"Suga" also talked about Silva's antics in the fight, the possibility of finally fighting Rampage Jackson later this year, and his road back to the 205-pound title. Check out the video below.