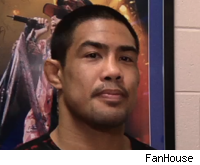 LAS VEGAS -- After beginning his career as a light heavyweight, it's safe to say that Mark Munoz is starting to feel very comfortable at 185 pounds. "The Phillipine Wrecking Machine" won his second straight fight at middleweight on Saturday night, defeating Ryan Jensen via submission due to punches at UFC 108.

MMA Fighting spoke to Munoz about improving his game since dropping weight classes and training with the world famous Team Black House. Check out the interview below.