Dana White Has to Answer to James Toney Following UFC 108 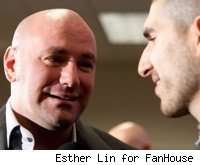 LAS VEGAS -- Dana White didn't have much time to celebrate Saturday night's UFC 108 event because former boxing champion James Toney demanded to speak to him about fighting in the UFC in the near future. Toney has been talking about making the transition to MMA recently, and he finally tracked down White at Saturday night's post-fight press conference.

MMA Fighting spoke to White about the possibility of Toney fighting in the UFC and his thoughts on Saturday night's card. Check out the video interview below.