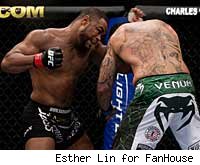 One after another, fighters dropped from the card, matchups were erased and critics complained.

How bad did the "curse" get? Even UFC matchmaker Joe Silva, who was left scrambling several times trying to fill holes in the card, blew out the medial collateral ligament in his knee in the days before the event.

That is so perfectly, fittingly ironic that you can't be blamed if amazement comes ahead of your concern for Silva.

Silva, of course, will be OK, and so too was his handiwork.

UFC 108 ended up being a showcase, with seven of 10 fights concluding in decisive finishes, a highlight reel submission, a pair of star-making knockouts and an exciting main event.

From a purely strategic standpoint, the event, which drew 13,255 fans for a live gate of around $2 million, perhaps most importantly set up the once and future grudge match between former light-heavyweight champions and Ultimate Fighter season 10 coaches Rashad Evans and Quinton "Rampage" Jackson.

Before the fight, UFC President Dana White told the media that Evans would not face Jackson unless he could get past Thiago Silva.

He did -- though barely.

After winning the first two rounds by executing a well-rounded game plan that featured a renewed emphasis on wrestling, Evans withstood a furious rally from Silva in the third, getting dropped but making it through for a unanimous decision victory.

The last round was pure theater, filled with drama as Evans faded and Silva tried desperately to finish him before running out of gas. With the win, Evans gets Jackson, probably in May, White said in the post-fight press conference.

Also key to the card's success were the performances of Paul Daley and Junior Dos Santos. MMA fans love nothing more than fighters capable of ending someone's night with one thunderous strike. Both Daley and Dos Santos have that ability in spades, and displayed it on Saturday. Daley had his second straight dominant win, knocking out the returning jiu-jitsu wizard Dustin Hazelett in spectacular fashion at 2:24 of round 1.

Dos Santos, meanwhile, took on the explosive striker Gilbert Yvel and devastated him with a left hook before finishing him with ground strikes in just 2:07.

The Brazilian heavyweight, who improved to 10-1, moved his name into the conversation in the heavyweight title picture, along with Frank Mir, Shane Carwin, Cain Velasquez, and his friend and mentor Antonio Rodrigo Nogueira.

On top of it all, there was a spirited, if slightly one-sided slugfest between Joe Lauzon and Sam Stout, and a rarely seen, superb kimura/inverted triangle choke pulled off by Cole Miller after being dropped by Dan Lauzon.

The action was great, but here's the thing that maybe gets lost in it all: the UFC and its athletes show the ability to pull a great event out of horrible circumstances. There is very little chance that anyone who bought the pay-per-view shut off their television feeling robbed, which says a lot when you consider that at one point, Anderson Silva, Brock Lesnar and Nogueira could have been on the card.

Many thought the final product could be a debacle, but the pride of the fighters wouldn't allow that. It was a similar story at December's UFC 107, which despite a main event featuring BJ Penn, was thought to be light on depth and star power. This time around, the fighters openly spoke about being motivated by the criticism constantly lobbed at the card. Afterward, White was so impressed with the UFC 108 fighters that he said no one would be released following the event.

So next time you rip the UFC or any other MMA organization for what appears to be a lackluster card, think twice. You may not want to plunk down your hard-earned cash for it, and that's certainly your right. But just know that your doubt might be the very reason the event ends up being much better than you think.