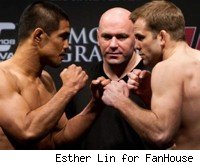 LAS VEGAS -- This is the UFC 108 live blog for Mark Munoz vs. Ryan Jensen, Mike Pyle vs. Jake Ellenberger and Rafaello Oliveira vs. John Gunderson.

The first bout is scheduled to begin at 7:30PM ET.

Round 1: Jensen grabs a hold of Munoz's head early, and then immediately pulls guard. Interesting decision considering Munoz's wrestling background. Munoz easily escapes, and then stands up. Jensen seems to have rocked Munoz with rights. Munoz regroups, and takes Jensen down. Munoz is landing vicious hammer fists to Jensen's face. Seemed like Jensen tapped for a minute, but the referee Mario Yamaski doesn't stop the fight. Munoz continues to drop bombs on Jensen, and eventually Jensen taps.

Round 1: Ellenberger, who surprised a lot of people with his relentless style against Carlos Condit in September, rushes in on Pyle right off the bat, and takes him down. Ellenberger in full guard. Pyle doing a good job of not allowing him to posture up and landing effective blows from his back. Ellenberger tries to stand up, but Pyle keeps him from doing so by grabbing his wrists. Pyle lands a straight elbow to Pyle's head. Ellenberger gets up, and referee Yves Lavigne tells Pyle to follow suit. Seconds after they stand up, Ellenberger lands a double leg. Once again, Pyle does good work off his back by almost locking in a Kimura. Ellenberger responds by landing a body shot, which seems to have hurt Pyle. Pyle turtles up, Ellenberger ends the round raining blows. Fight would have ended if there were five more seconds in the round.

MMA Fighting scores the round 10-9 in favor of Ellenberger.

Round 2: Pyler shoots for a takedown early, but Ellenberger stuffs it. Ellenberger lands a knee to the body and then a right hook, which drops Pyle. Ellenberger finishes him off with several right hands on the ground.

Round 1: Oliveira working on Gunderson's lead leg early, landing a couple of kicks. Oliveira tries for a takedown 90 seconds in, but lands into a guillotine choke. Gunderson has it in pretty tight, but Oliveira is able to escape. Oliveira gets another takedown, and looks to have a pretty solid arm triangle, but Gunderson escapes. Oliveira secures full mount position, and lands a punches and elbows. Gunderson gets out of trouble but standing up and then immediately pulls guard. He seems very tired. Round ends with Oliveira throwing standing punches while Gunderson is on the ground.

Round 2: Oliveira lands a double-leg less than minute into the second round. Gunderson seems gassed. They stand up, but Oilveira takes him down again. Oliveira secures mount, but then takes Gunderson's back. He is working towards the rear-naked choke. Oilveira trying for all sorts of submissions on the ground: kimura, arm triangle, armbars. Round ends.

In between rounds, Gunderson's trainer, Shawn Tompkins, gave one of the most spirited corner speeches I've ever heard. He reminded Gunderson about how much he has had to sacrifice to get to the UFC, and that he was blowing it all. Let's see if it works.

Round 3: Doesn't seem like it. Oliveira takedown early in the round. The problem for Gunderson is a lack of cardio and no takedown defense. Oliveira is doing work off of Gunderson's back and then in mount position. He isn't really landing any big shots, but he is definitely controlling Gunderson on the ground. With less than 30 seconds, Oliveira secures Gunderson's right arm for an armbar, but Gunderson does a good job of not letting it go by holding it back with his left hand. Round ends.

Martin Kampmann pulls off a kimura against Jacob Volkmann at UFC 108 on Saturday, Jan. 2, 2010 in Las Vegas, Nev.