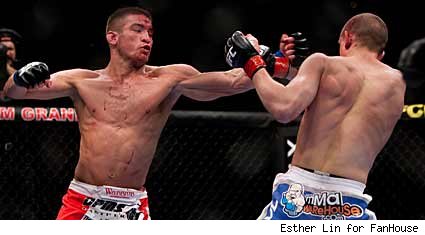 The fight went to the ground quickly, which was just where Lauzon wanted it, and although Stout rolled out of a kimura attempt and got to his feet, he had a nasty cut over his left eye to show for it. But once Stout got back to his feet he made an impressive comeback, landing punches and kicks and even won the first round.

In the second round the cut on Stout's face opened up again, but Stout shook it off and did plenty of damage with his hands. Lauzon briefly got Stout to the ground and tried to hold him there, but Stout controlled the round and won it handily.

The third round was all Stout for the first three minutes, as Stout simply peppered Lauzon with shots from all angles. With two minutes to go, however, Lauzon secured a takedown and almost sunk in a choke -- but Stout got free, got back to his feet, and toyed with Lauzon for the final minute.

All three judges gave all three rounds to Stout, with one judge even giving him a 10-8 round in the second.

Stout said afterward that he was worried he'd get submitted in the first round, saying, "I was like, 'Damn, he's got my arm.' I started rolling, twisting and turning and got out of it."

Lauzon's brother Dan Lauzon fought earlier in the night, making it the first time that two brothers have fought on the same UFC card. Although both Lauzon brothers lost, they have plenty to be proud of.

And Stout has even more to be proud of. In his battle with Lauzon he showed great heart and determination, and he bolstered his reputation as one of the most exciting lightweights in MMA.