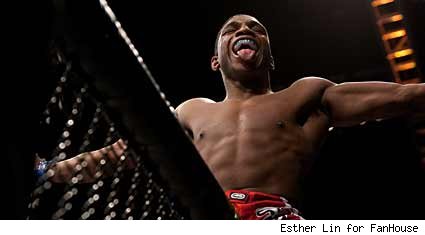 Paul Daley showed on Saturday night why he might be the hardest puncher in MMA's welterweight division, knocking out Dustin Hazelett with a brutal left hook and another hard punch on the ground to win their fight at UFC 108.

Hazelett opened the fight with a somersault-style front roll, trying to catch Daley off guard, but Daley saw it coming and backed away. After that Hazelett stayed cautious and attempted to avoid Daley's punching power, but all it took was one punch: Daley landed a brutal left hook and then pounced and landed another couple of punches on the ground before referee Herb Dean saved the unconscious Hazelett from further damage.

Daley may have landed an excessive blow on the ground, and he got a little too excited with his post-fight celebrations, but he apologized for that later and said he has respect for Hazelett.

"I wasn't surprised at all that he chose to stand with me," Daley said afterward. "Dustin is a great, great fighter. He's got great submission skills and I wish him all the best in the future."

Daley, who improved his record to 23-8-2, still has a long way to go before he's a complete, well-rounded mixed martial artist. But as a pure puncher, there's no one better in his weight class.
http://xml.channel.aol.com/xmlpublisher/fetch.v2.xml?option=expand_relative_urls&dataUrlNodes=uiConfig,feedConfig,localizationConfig,entry&id=808922&pid=808921&uts=1262510731
http://www.aolcdn.com/ke/media_gallery/v1/ke_media_gallery_wrapper.swf
UFC 108 Photos
Paul Daley finishes Dustin Hazelett in the first round at UFC 108 on Saturday, Jan. 2, 2010 in Las Vegas, Nev.
Esther Lin for FanHouse
Esther Lin for FanHouse