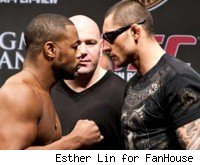 This is the UFC 108 live blog for Rashad Evans vs. Thiago Silva, the main event for tonight's pay-per-view.

Evans seeks revenge for his training partner Keith Jardine, whom Silva knocked out in 95 seconds at UFC 102 in August.

Round 1: Evans looks for a clinch early and they justle for position against the fence. Evans scores a takedown. Silva gets right back up, but Evans takes him down again. Evans quickly moves to full mount, but Silva quickly gets out and up to his feet. Silva lands a combo, but Evans shakes it off, then scores another takedown midway through the round. Silva back to his feet again. Nice exchange with both men landing just before the 1:00 mark. Another clinch and Evans backs away and lands a left on the way out. Evans takes him down again but the crowd begins a "Silva" chant. MMAFighting.com scores the round for Evans, 10-9.

Round 2: Evans comes in with strikes and then changes levels for a takedown try. This time, Silva stops it. They re-set with 4:00 left. Evans takes him down again immediately. If Silva can't stop the takedown, he's going to have a tough time winning. Silva gets upright again midway through. Silva stops another takedown try, but he's spending way more time on defense than offense. Silva landed his first hard strike of the fight with a head kick, but Evans immediately takes him down again. MMAFighting.com scores the round for Evans, 10-9.

Round 3: Silva is getting frustrated with Evans' gameplan here. He shrugs one off, but you can see in his face that he's frustrated. Silva actually stopped at one point and tried to get the crowd into it. Then, he started jutting his chin out. He rocked Evans with a right. Evans went down. Silva is just opening up on Evans. Evans is hurting but Silva is tired and backs out. Evans initiates a clinch with 40 seconds left, hoping to ride it out. Silva tries to pull away but Rashad is insistent on it. MMAFighting.com scores the round for Silva, 10-8, and the fight a draw.

Silva clearly won the third, it was just a matter of 10-9 or 10-8. It's not surprising the judges scored it 10-9. It could have been scored either way.