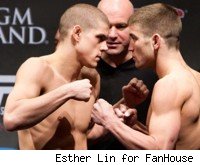 This is the UFC 108 live blog for Joe Lauzon vs. Sam Stout, a lightweight bout on tonight's pay-per-view.

Joe Lauzon is coming off a knee surgery and hasn't fought since last February. Canadian Sam Stout will step into the Octagon for real this time, after missing a fight because opponent Phillipe Nover had to pull out due to a seizure the day of the fights.


More: UFC 108 Results | Stout Beats Lauzon in Thrilling Decision
Round 1: Lauzon gets a takedown within 15 seconds. Lauzon cut him with a short elbow, then went for a kimura. Stout kept his composure and rolled free. Back to standing momentarily, but Lauzon goes right back to the takedown and drags Stout down. Stout gets up quickly. Lauzon pulls guard with the round half-over. Stout lands a couple punches and elbows, but eventually lets Lauzon up. Lauzon tries another takedown. This time, Stout stuffs it. His striking suddenly opens up as he lands a body shot and combinations. Stout with a spinning backfist just before the round ends. Excellent round has the fans on their feet. MMAFighting.com scores a close round for Stout 10-9.

Round 2: Stout stuffs an early Lauzon takedown again. Stout punishing him with the standup, but Lauzon manages a takedown one minute in. Stout backs against the cage and works his way up. Lauzon catches a Stout leg kick and tries another takedown but Stout stays upright. Stout is taking control of the exchanges with a series of body shots and head strikes. Two minutes left in the round. Lauzon is tiring as Stout lands more and more, wearing down his body. He tries another takedown and pulls guard, but Stout easily pulls out. Stout ends the round on top, landing strikes. MMAFighting.com scores the round for Stout, 10-9.

Round 3: Lauzon comes out swinging to start the round, but Stout avoids the strikes and answers back. Early in the fight it was anyone's match, but Stout has really taken it over. Lauzon tries another takedown, but doesn't have the explosion to finish it as Stout pulls away. Stout still looks fresh, circling and striking, going to the body repeatedly and wearing Lauzon down. With two minutes left, Lauzon catches a leg kick and gets the elusive takedown. Lauzon needs a submission or TKO. He moves to half-guard. He tries the guillotine. Stout fights him off and gets back to his feet. Lauzon tried the diving heel hook but didn't come close. Stout closes in style with a jumping knee and spinning backfist. Dominant final round. MMAFighting.com scores the round for Stout, 10-9, and the fight for him as well.