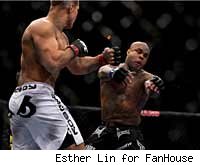 Junior dos Santos showed once again that he's one of the most powerful punchers in all of mixed martial arts on Saturday night, leveling Gilbert Yvel with a powerful punch in the first round of their fight at UFC 108 and then finishing him off with a few more strikes on the ground.

Referee Herb Dean stopped the fight just over two mintues into the first round as dos Santos pummeled Yvel on the canvas. Yvel complained that it was a fast stoppage, but it wasn't: Dean did the right thing by stopping the fight.

When asked after the fight where he thinks he ranks in the heavyweight division, dos Santos answered, "On the top."

Dos Santos isn't quite on the top yet, but he's certainly close: In four UFC fights he has four stoppage victories, and all four of them have been the result of his powerful punches.

"I love this," dos Santos said afterward. "I love being a fighter. I love this place."

UFC fans are increasingly loving dos Santos. He's among the sport's elite heavyweights, and at age 25 he has a very exciting future ahead of him.