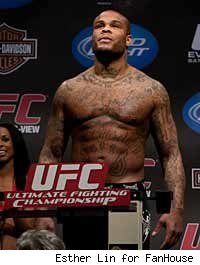 Controversial heavyweight Gilbert Yvel has showcased his knockout power for organizations all over the world, but never under the UFC banner. That changes Saturday when he takes on contender Junior Dos Santos at UFC 108 in Las Vegas.

In this exclusive interview with MMAFighting.com below, Yvel talks about putting his bad boy reputation to rest as he makes a fresh start with the UFC.

Ray Hui: What were you doing after the Affliction show was canceled in August? Did you immediately look for other fights?

Gilbert Yvel: I tried to talk to the UFC and Strikeforce to see what's up. I was training a lot, and we were ready. We were hoping that something would fall out and they would need a heavyweight, but this took a little longer than we expected.

When you were called up as a replacement for UFC 108, did you already have a contract with the UFC, or were you signed once they needed someone for Junior Dos Santos?

Many people weren't sure if you would be able to fight in the UFC because of your past disqualifications. Everything I hear from you or listen to you in interviews, you come off as a soft-spoken, nice guy. Where does the other side of you come from?

Maybe me surrounded by bad person, and it made me a little bit ... It's coming from the past and it's never coming back. Let's keep it at that.

You've only been issued a one-fight license. Is it a distraction for your or take away from your aggressiveness that you'll have to be on your best behavior in order to have your license renewed past Saturday?

Do you think Junior Dos Santos will test your stand up?

I hope so. I saw his fight against Cro Cop and he did really good. I rather fight him standing up than on the ground. But whatever is going to happen is going to be fine with me. He's a highly ranked fighter and for me a good step up if I win this fight. It'll put me out there.

After your win over Pedro Rizzo, you said you wanted the UFC title and that you had a long way to go. But right now it's less than six months from that fight, and if you beat Dos Santos, you might actually be a few fights away.

I really don't know. The first thing is to beat Junior dos Santos and then see what's in store next, because I cannot see in the minds of the owners of the UFC and what they got planned for me. Just let me put Junior dos Santos down and off to the next one. I hope to fight for the title, and how long it would take, I don't know.

Have you worked on your ground game?

After my Pedro Rizzo fight, I had time to really work on my ground game. I got my purple belt in Brazilian Jiu-Jitsu. When I was living in Holland, I didn't train on the ground. We didn't work on the MMA game. We were like fighting. But now my ground game is better. (Laughs.) Let's say better. I got some tricks. Let people think my ground is not good enough. I'm working on it and I'm doing my best. And I hope to surprise people.

It's got to help that your manager John Lewis is a Brazilian Jiu-Jitsu black belt and instructor.

How long have you been working with him?

I met John like 10 years ago and I've been coming back and forth for 10 years to Vegas. This is the first time I've stayed longer than a month. After my Pedro Rizzo fight, I was with him for two-three months and he gave me my purple belt. I learn quick, and I'm strong. I don't know the rules of the ground game, but I hope to get better pretty quick. We train every morning Monday to Friday with some really solid ground fighters.

Now that you're in Vegas, what's your team association?

In the beginning I went a couple of times to the Couture gym and Wanderlei's, but now we try to keep everything at our own gym (Jsect). We got some boxing guys. We got some good wrestlers. We pay some people to spar with me. That's a little bit of a problem because nobody really wants to spar with me. They all get knocked out. (Laughs.) It's not like I do it on purpose but my stand up skills are sometimes too fast. When John talks to sparring partners, and they same my name, they go quiet on the phone. And they ask you how much you're willing to pay for it. It's really difficult to get sparring partners for me.

There are some potentially exciting fights with you in the heavyweight mix. Would you be interested in a fight against Pat Barry?

I used to train together with Pat. He's a nice guy. I don't want to sound cocky, but Pat is a nice guy and a pretty good stand up fighter, but he's not in my league. Let's just say that it's good for him. I was surprised he got a win over Antoni Hardonk because Antoni in my mind is way better standing and better on the ground. You never know what's going to happen in the cage.

You've beat Cheick Kongo before. Since then he's become a star for the UFC. Would you be interested in giving him a rematch?