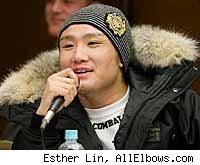 LAS VEGAS -- Takanori Gomi, once considered to be one of the best lightweight fighters in the world, has signed a multi-fight contract with the UFC. MMAFighting.com learned of the acquisition from sources on Friday.

Nicknamed "The Fireball Kid," Gomi (31-5-0, 1 NC) had talked about wanting to sign with Strikeforce or the UFC in 2010, and recently spent some time training at the American Kickboxing Academy in San Jose, Calif.

No word on when and where Gomi will make his debut for the UFC. The organization has yet to officially announce the signing.

The former PRIDE lightweight champion has recently gotten his career back on track after losing two straight fights in Sengoku. Gomi followed up his victory over Takahashi Nakakura at the Shooto: Traditional Final event in May with a unanimous decision win over Tony Hervey at Vale Tudo Japan 2009 in October.