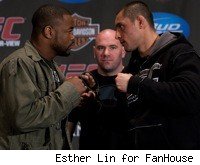 LAS VEGAS -- We're back with another FanHouse at the Ultimate Fighting Championship preview show, and this time we're talking about Saturday night's UFC 108 pay-per-view event. First, we were joined by former WBC bantamweight boxing champion and a silver medalist at the 1992 Summer Olympics, Wayne McCullough, who now works for the UFC, to break down the main event between Rashad Evans and Thiago Silva. We also talked about what kind of effect Paul Daley's tough weigh cut will have on his fight against Dustin Hazelett.

Later in the show, we were joined by John Morgan of MMA Junkie and the Dallas Morning News' MMA blog. Morgan previewed the Junior dos Santos-Gilbert Yvel heavyweight clash, as well as the bad blood between Dan Lauzon and Cole Miller. Enjoy the show below.

Please click on the second icon from the left to watch the show.