Dream Reprimands Aoki, Who Admits He Was 'Rude' 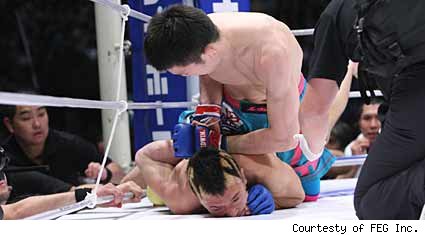 Shinya Aoki gave Mizuto Hirota a broken arm when Hirota refused to tap out from Aoki's hammerlock submission in their fight at Dynamite 2009, and then Aoki gave Hirota a middle finger on top of it.

It was a classless act from Aoki, and Dream event producer Keichi Sasahara said afterward that Aoki was reprimanded for his antics. For his part, Aoki said, "After my fight, I was excited, and so I did something rude that I should apologize for.

Aoki also described what it felt like to fracture his opponent's humerus:

"When I had his arm behind his back, I could feel it popping," Aoki said. "I thought, 'Well, this guy's pride just won't let him tap, will it?' So without hesitation, I broke it. I heard it break, and I thought, 'Ah, there, I just broke it.' I was stopped afterward, but even if I hadn't been, continuing to break it more would have been fine by me."


Aoki is Dream's biggest star, so there will be no discipline beyond that reprimand. In fact, Sasahara is already talking about his big plans for Aoki's 2010, which is likely to include a bout with Tatsuya Kawajiri in March and possibly a fight against Strikeforce lightweight champion Gilbert Melendez later this year.

Among the elite fighters in MMA, few stay as active as Aoki. His win over Hirota was his fifth fight of 2009, and he said he'd like to fight at least seven times in 2010.