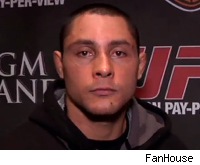 LAS VEGAS -- Had it not been for the slew of injuries that hit Saturday night's UFC 108 card, it's safe to say that Thiago Silva would not have been fighting in the main event of what traditionally is one of the organization's biggest shows. But Silva has been handed a golden opportunity to not only defeat former light heavyweight champion Rashad Evans, but to do so in front a large audience.

MMAFighting.com spoke to the Brazilian power puncher at Wednesday's pre-fight press conference about training in the shadows of the Rashad Evans-Rampage Jackson feud, making a conscious effort to learn how to speak English, and fighting in his first UFC main event. Check out the video interview below.