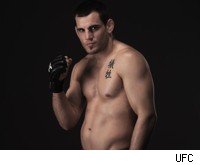 Thiago Alves will look to avenge a loss to Jon Fitch at UFC 111 on March 27 in Newark, N.J., according to First Round Management, Alves' representation.

The rematch arguably determines the No. 2 welterweight in the world, barring an upset on the same card when Georges St-Pierre defends his belt against Dan Hardy in the main event.

Alves and Fitch each tore through the UFC's 170 division for three-year periods before getting thoroughly dominated when it came time to challenge St-Pierre for the crown.

The two were actually supposed to rematch at UFC 107 earlier this month, but Alves pulled out due to a knee injury. Fitch stayed on the card and improved his record to 21-3 with a decision over Mike Pierce.

In their first meeting, Fitch stopped Alves with punches at a UFC Fight Night event in June 2006. The loss for Alves proved to be just a blemish as the American Top Team fighter bounced back from that fight with seven straight Octagon wins.