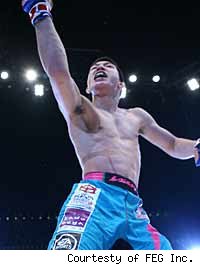 When you're a professional athlete and you hear a competitor's bone snap, that should be enough to draw you out of whatever testosterone- or adrenaline-fueled action you're engaged in.

That disgusting, unmistakable sound serves as a reality check that the sport you're participating in has real-world consequences that extend far beyond the arena or stadium.

When that sound doesn't give way to the humanity in you, there's a problem.

During the Dynamite 2009 card held in Saitama, Japan, submission ace Shinya Aoki won his bout with Mizuto Hirota when he clearly broke Hirota's arm with a hammerlock. That should have been enough for him. But he was hardly done.

Instead, Aoki stood over his fallen opponent, extended his middle finger at him and taunted him. Then, he ran around the ring excitedly and flipped off the fans, jumped up to the second rope to bathe in the fans' reaction -- which incredibly was cheers -- before running back up the ramp and finally, thankfully, disappearing.

Shinya Aoki gets ready to punch Mizuto Hirota, with Hirota's right arm pinned behind his back, at Dynamite!! 2009 in Saitama, Japan on Thursday, Dec. 31, 2009.

Shinya Aoki breaks the arm of Mizuto Hirota after Hirota refuses to tap at Dynamite!! 2009 in Saitama, Japan on Thursday, Dec. 31, 2009.

Shinya Aoki delivers an obscene gesture to the crowd after his victory at Dynamite!! 2009 in Saitama, Japan on Thursday, Dec. 31, 2009.

At no point did he go check on Hirota or exhibit any type of sportsmanship whatsoever.

His defenders will say, "Hey, it's the same thing Brock Lesnar did to Frank Mir after beating him at UFC 100."

First of all, Lesnar was soundly booed by the fans for his classless action after taunting Mir. Second, Mir hadn't suffered an obvious major injury in the fight. Third, Lesnar apologized in the post-fight press conference. Regardless, both Lesnar's and Aoki's actions were wrong.

What Aoki did is similar, but not the same. He knew his opponent had been badly hurt, but chose to take the lowest road possible in literally adding insult to injury.

We try to explain to people that what we're watching is a sport, that its participants are well trained, that they respect each other and can separate the personal from the professional. Sometimes, as in the case of Mir checking on Cheick Kongo after his grudge match victory earlier this month at UFC 107, we're proven right. The two had ripped each other in the media for days leading up to the fight, but after the final bell, Mir had the common decency to make sure he was OK.

The arm break, I can live with, because Hirota did not tap or verbally submit. Aoki has every right to work the hold until either one of those actions happens or, as eventually occurred, a limb breaks. That's just the reality of our sport, and Hirota is just as responsible for the broken limb as Aoki, as he could have tapped out and saved himself.

But the actions afterward are all on Aoki.

Regardless of what trash talk went on before the fight, you should have enough basic human compassion to realize that the unnatural sound that just came from your opponent's arm signifies something horrific has happened. At that point, you've won. You're the Alpha male in the fight. Your opponent is literally lying in submission at your feet. What does the middle finger prove? You can't kill someone twice, you know?

People say, "It's fighting, not chess." Once the bell rings, it ceases to be fighting. Then, whether it's orchestrated for effect or an immature reaction, it's just you acting like a jerk.

Maybe that's OK with Aoki. At 23-4 and as the DREAM lightweight champion, he has spoken of wanting a higher profile in the MMA world. A 77-second win over the Sengoku champion was impressive enough, but maybe this was his way of getting it for himself. Well, he got it. Everyone's writing and talking about him now. But there's a right way and a wrong way to do it.