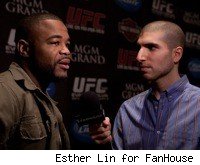 LAS VEGAS -- Rashad Evans' last two fights have taken place in Las Vegas, but both yielded very different results. At UFC 92 in December 2008, he won the light heavyweight title against Forrest Griffin. However, he would go on to lose the title in his first defense at UFC 98 in May against Lyoto Machida.

"Suga" returns to Sin City at UFC 108 on Saturday night against Thiago Silva, and after a coaching stint on "The Ultimate Fighter," he promises to return to his old championship form against one of the most feared strikers in the sport. MMAFighting.com spoke to Evans about his transformation as a fighter, his ongoing feud with Rampage Jackson and his newfound fame. Check out the video interview below.