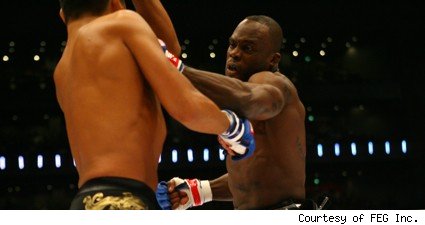 Melvin Manhoef landed a powerful flurry that dropped Kazuo Misaki and caused the referee to jump in prematurely and stop the fight quickly, handing Manhoef a first-round technical knockout victory at Dynamite 2009 on New Year's Eve in Japan.

Manhoef's combination in the first round backed Misaki into the corner and caused him to fall down, and as soon as he did, the ref stopped it. Misaki was upset and confronted the referee, but the result stands: Manhoef won by TKO at 1:50 of the first round.

More: Dynamite!! 2009 Results | Ikuhisa Minowa Drops Sokoudjou to Win Super Hulk Final
Manhoef is expected to come to the United States and fight for Strikeforce in early 2010, and American fans will love his hard-charging style. He took no damage at all from Misaki, which means he should be ready to fight as soon as Strikeforce has an opponent for him -- possibly as soon as the January 30 card in Miami, where he could fight Robbie Lawler.